"We are prone to judge success by the index of our salaries or the size of our automobiles, rather than by the quality of our service relationship to humanity." - Dr. Martin Luther King, Jr.


On my last night in Bagamoyo, after a typical power outage, a group of us went down to one of our favorite local watering holes, Hill Side. The sign once must have said “Hill Side Bar” but the owner, wanting it to be of a higher caliber must have decided that, rather than buying a new sign, it would be easier to simply cut a hole in the sign where “Bar” once was. Below the entrance hangs another sign that reads, “The ultimate dinning experience.” It’s one of the nicest places in Baga and has its own generator, so is a likely spot when the power decides to take a break. After feeling our way down the street and finding a table, I enjoyed my last beer in Baga. Major came with his guitar and sang me a song. It was a perfect way to end my time there.

Monday morning, after packing, breakfast, and one last trip to the internet café, I said goodbye to the staff and friends at CCS. As Kennedy drove me away from Bagamoyo south towards Dar, I felt a mix of sadness and accomplishment, knowing that the true goal of my trip had been accomplished.

We neared Dar and traffic sped to a frenetic pace and Kennedy began to receive calls from the airport. My scheduled flight was about to leave without me, even though it was only 3:30 and it was supposed to depart at 4:20. Apparently schedules are more of an estimation when it comes to air travel in Tanzania, as well. So, after what sounded like a very heated conversation, Kennedy took a sharp turn off of the main road and said simply, “Shortcut.”

We went through what looked a lot like the poorer parts of Bagamoyo on a bumpy dirt road. Soon, I noticed an overpowering stench. This was the slums of Dar. What I had smelled was the dump. All around, huts and tiny stores were built on and around the refuse of the city's more than 1 million denizens. Children walked around barefoot and people went about their daily business as if it were normal because, well…to them it is. I was grateful when Kennedy’s reckless and fast driving bumped us through that area and back onto a tarmac road. We pulled up to the airport, I hopped out and shook his hand while another man grabbed my bag and motioned for me to follow him. It was at this point that I realized: Wait a minute. Kennedy just booked a 10 day trip for me, including airfare and he doesn’t even know my last name!

Foolish, foolish Amber…this is Africa! After following the man through a rather haphazard looking metal detector, we arrived at a tiny waiting area and a small desk. A clerk shoved a piece of paper in front of me and instructed me to write my name. Ah yes…my boarding pass. The man disappeared through a set of double doors toward about five planes, all smaller than anything I'd been on in recent memory, with my bag. He returned a moment later, empty handed and motioned for me to sit. A few minutes later, the desk clerk shouted to the waiting area, “504 to Kili!” (504 is the airline name) and pointed toward an orange prop plane across the tarmac. I was too tired to care much that the 14 seater was rather old, and that I could see right into the cockpit. Nothing seemed to be duct-taped together and I wasn’t sharing the plane with livestock. That’s luxury.

An hour later, I could see Kili rising above the clouds. We landed without incident and I was met by George and Phillip, owner of Mt. Kilimanjaro View Lodge. On our way from the airport, through Moshi town, and 9500 feet up the side of Kilimanjaro, Phillip kept me entertained stories of the lodge, the land, and of his tribe, the Chagga. He informed me that I was currently the lodge’s only guest. So, we climbed for about an hour before reaching the lodge’s gate, passing villages, maize fields, and banana trees. (The Chagga tribe numbers about one million people and, unlike the Masai tribe of the plains, its members are adept farmers; coffee, maize and bananas being their largest crops.) The staff greeted me like family and pointed out the glittering lights of Moshi, now far below.

Being the only guest of a hotel is slightly awkward, especially when communicating with the staff, who speak Chagga language and Swahili, but very little English. So, with my limited Swahili and their limited English, our conversation was basic and marginally effective.

There I sat, around a small fire with six Chagga tribespeople, communicating with a limited set of words, smiles, and laughter. They pulled out small drums and we sang until my tired eyes betrayed me. Three of them escorted me to my tiny dark hut where I wore about three layers of clothing to keep away the cold, and went to sleep.


Waking up on Kili is cold, damp, and cloudy. All the same, it’s waking up on Kili. And, since I slept in nearly all of my clothes, getting dressed was relatively easy! After another conversation that established the making of food and my eating of the same, I met with my local guides for the day, Remi and John. We left the lodge and started downhill on the red clay road, passing Chagga people bent over, working in their fields. We walked through small groups of houses and a primary school before turning down one road and then another, to a narrow path that led over rickety log bridges and under avocado and banana trees. Eventually, we came to a beautiful waterfall, Mnembe Falls. At this point I, of course, was covered in the red clay mud while my guide, in leather dress shoes, was unscathed. After a few photos and a short break, we returned the way we had come, passing villagers who spoke quickly to me in Chagga language. John then took a hard right off of the path up a hill so steep that we had to inch our way along while ducking underneath the leaves of banana trees. Finally, we stepped up into the middle of a group of houses.

An old woman came to greet us with a smile. She was Phillip’s mother. At age 101, she is frail but very strong. I was ushered into a small sitting area where coffee was served. I learned about the history of coffee growing in this region before they walked me through all of the steps of the coffee-making process, from picking the beans to finished coffee.

I was still looking at my newly ground coffee (no push-button electric grinders here…instead, they use a large wooden pestle and mortar) when I heard drums. I looked up to see a group of women and one elderly man dance toward me. They formed a circle and invited me in. Soon, they were laughing at my attempt to sing and dance along…just another unforgettable African moment.

We left the village and began the ascent back up the mountain to the lodge, passing other villages as we walked. We stopped once to try the local brew, a millet and fermented banana concoction. Through a dark doorway into a darker room lined with cardboard, the process was explained before a man appeared with a large plastic tub about the size of a large yogurt container. In the tub was a liquid about the consistency of thin Cream of Wheat. Banana brew. The tub was passed to me. I took one teeny, tiny sip and made it official: Banana beer is NOT my thing. John took the tub from my hands and downed the entire thing in about ten seconds. So much for not drinking on the job!

After dinner, we repeated the songs around the fire. This time, the women dressed me in a kanga and renamed me “Amber Dada (sister), Queen of Kili”. I could get used to this.


I awoke to yet another cold and damp morning on Kili…this time, cold rain fell. Packing to spend a month in the hot coastal region of Africa fell dramatically short when it came to preparing me for the chilly weather up here. After an enormous breakfast, I packed my bags and waited for Phillip to take me down the mountain. When I went back up to the main lodge, I met Walter, the cook.

So, as Walter struggled with my heavy backpack down the slimy red clay road and onto a narrow path in his leather loafers, I baby stepped behind him in my hiking shoes, still slipping my way down. Twice he took a tumble in his purple LA Lakers pants and black leather loafers with my bag on his back. Twice, I said, “Pole sana”, feeling like a complete tool that this poor guy insisted on lugging my bag down a steep wet hill. We passed some of the other lodge employees on their way up the path, laden with boxes of supplies and food. I said goodbye to each of them and stood there awkwardly on the hill while they all argued in Swahili or Chagga over what I guessed was the distribution of my tip. Then, we continued our descent, passing waving children and women carrying wooden chairs or large bunches of bananas on their heads before finally meeting up with our car. This carried me down into Moshi, where we switched to another vehicle that drove me to Arusha, down another rutted dirt road past chickens and goats and busy people, to my next stop.

So…here I sit at the L’Oasis Lodge in Arusha. I have taken a hot-ish shower under a real lightbulb (not a strategically placed headlamp) and am thrilled to be in a place where there is electricity all day long, rather than for only a few hours in the evening. I’m still freezing, missing the heat of Baga, and looking forward to the hot beaches of Zanzibar in a few days and my own bed, house, and hot shower beyond... It’s been a decidedly T.I.A. day.
Posted by Amber Mc at 6:19 AM

Amber Mc
I'm a 7th grade teacher living in Portland, OR. I'll be spending a good portion of my summer volunteering with Cross Cultural Solutions in the coastal town of Bagamoyo, Tanzania teaching children at the Mwsama Primary School. amberdmc@verizon.net

Thanks to My Sponsors! 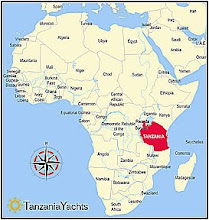 Bagamoyo is a small village north of Dar es Salaam on the coast of Tanzania.